Being an employee means adhering to specific workplace rules and risking inevitable consequences if you don't. Included in those policies is the dress-code, which will, of course, differ depending on where you work. However, sometimes the rules aren't so clear-cut and can be left open to the employee's interpretation—for example, deciding whether or not wearing a bra is necessary. One woman faced this very problem and posted on Reddit's Am I The A**hole after receiving complaints from her new coworkers about her refusal to wear a bra in the office. She stresses that she didn't wear a bra at her previous job, her nipples weren't on show, and a sweater hid her 'large boobs,' and she was, in her opinion, entirely appropriate. Redditors, however, disagreed and argued that, although it sucks, it was unprofessional and if she didn't like the policy at her new workplace, she should find another job. What do you think? 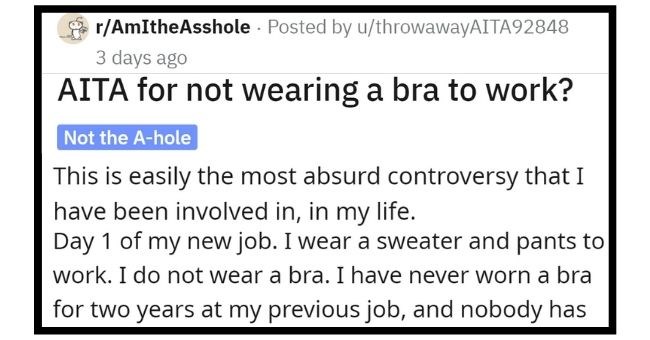 Confidentiality between therapists (and all other medical professionals) and their clients is kind of a big deal, which, if breached, is cause for dismissal and removal of their medical license. I mean, if I found out my therapist had shared information discussed in our sessions with someone else, I'd be furious. But If I discovered that she'd shared it with anyone in my family, it would be a whole new level of hell. A hell which one girl found herself in when she found out her therapist had been sharing notes from their sessions with her new stepmom. She posted on Reddit's Am I The A— Hole, explaining that her mother had died unexpectedly a year prior, and her dad remarried his new wife within the year. The OP, who was struggling to cope, started seeing a therapist, who turned out to be sharing information from the sessions with her new stepmom, who incidentally was the one paying for the sessions. Ethical, huh? Understandably, the OP was gutted and betrayed. When she turned to her father for sympathy, he sided with his new wife, leaving her at a loss. It sounds pretty sh**ty for her all-round, but fellow Redditors jumped to her defense, correctly encouraging her to report the therapist and get away from her toxic family as fast as she can. 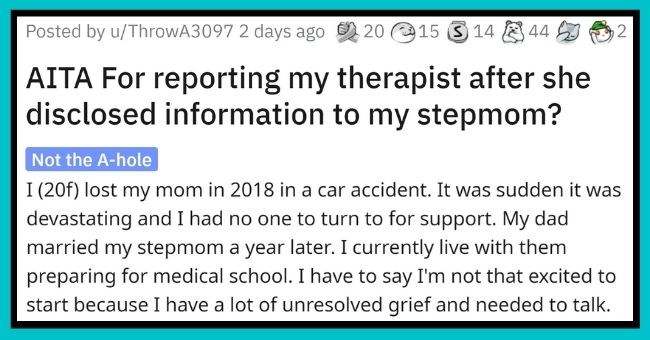