And if you can't find one that suits you, A. you're either lying or B. you'll definitely find some for people you know.

We still think you're lying, though.

Whiskey River Soap Co. is different than all other soap companies out there. Why? Written on their website, the company "was founded more than fourteen million years ago in the outskirts of Ancient Rome by a ragtag group of freelance gladiators, stray dogs and out-of-work magicians. Apart, these charlatans were nothing but lazy ne'er do wells akin to a modern-day cable company, but when they encountered one another by chance at the dumpster behind the monster truck rodeo and picked up that legendary tube of half-used superglue, they formed a bond that would last throughout the ages, and even be featured on the History Channel as incontestable proof of alien life."

Name another soap company you know that has such a rich history!

Okay, maybe they weren't being 100% honest. However, and more importantly, they claim to "very much admire magicians, monster truck rodeos and superglue."

You had us at 'superglue'.

So starting over, Whiskey River Soap Co., they make wonderful scented soaps and candles, that hopefully also make you laugh. They have also recently introduced a new line of pocket journals. Now, they're "all about creating our own products locally because we're not just selling you a funny label wrapped around something mass-produced in China." 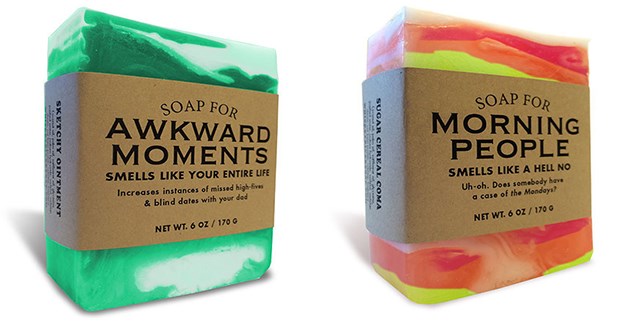 Things Which Feel Better Than An Orgasm