I think I can probably speak for most people when I say that growing up, my sex ed was almost non-existent. I picked up everything I know now along the way, either through the garbage my friends told me or, as I got older, through some awkward trial and error experiences. I was that gullible kid who believed you could get pregnant from swimming in a pool and that my parents only had sex the same amount of times as the number of siblings I have (and even that was way too many for my liking). People on Reddit share some of the weirdest myths about sex they believed as kids, and they make me feel less alone, as that kid who believed anything and everything about the big, bad world of sex.

Everyone remembers their sex-ed in school. Or, in some people's cases, their lack thereof. Whether it consisted of your PE teacher awkwardly putting a condom on a banana or your biology teacher told you that sexual contact of any kind was a sin that you'll burn in hell for, I'm betting it was pretty uncomfortable. These real, sex-ed horror stories from students and teachers show how painfully awkward the topic is and how wrongly schools teach their students such an important issue. 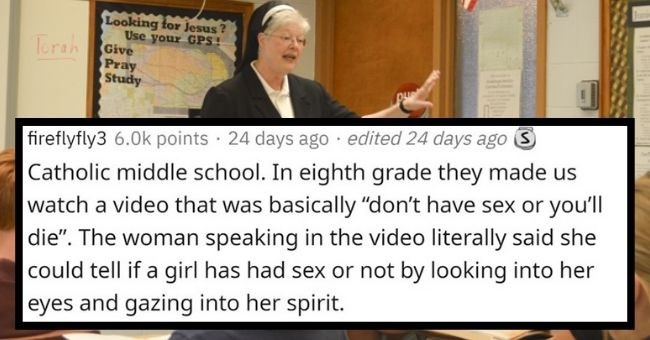 Worst Advice To Give To A Virgin For Their First Time

If your school was anything like mine, you probably didn't get much sex-ed in school. I vaguely remember mine consisting of our biology teacher standing awkwardly at the front of the classroom, pointing to diagrams of the male and female anatomy, clearly wishing the floor would swallow her up. The rest was down to our self- discovery and whatever rumors we heard that week. Some real education about healthy sexual relationships would have been useful because, as a teenager and young adult, you are vulnerable to pressures and expectations. A funny AskReddit thread asking people for the WORST advice you can give a virgin for their first time highlights how damaging the porn industry is on healthy sexual expectations. And, in turn, the amount of misinformation and dangerous messages young people are receiving about sex. 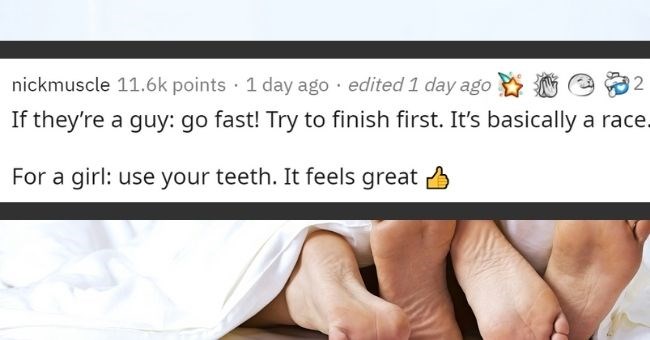