Gone are the days when being an influencer was a fun side-gig. Nowadays, if you want to make it on social media, you have to devote all your spare time to building a following and creating an online presence. But when you're dedicating that much time, the lines between your real life and the life you're pretending to live online can become blurred. One guy learned this the hard way when he uploaded a video to TikTok showcasing his daily routine, in which he claimed to spend four hours a day cuddling with his girlfriend. His girlfriend clapped back, saying she barely sees him for half an hour a day because of the extra time he dedicated to growing his following on TikTok. In response, she created a video displaying screenshots of his recent attempts to cancel plans, proving how little time he actually spent with her. Her actions resulted in him losing a chunk of his followers, who claimed he was a fraud and a liar. Understandably, her boyfriend wasn't happy with her, but she posted her predicament on Reddit's Am I TheA—hole claiming her actions were justified. What do you think? 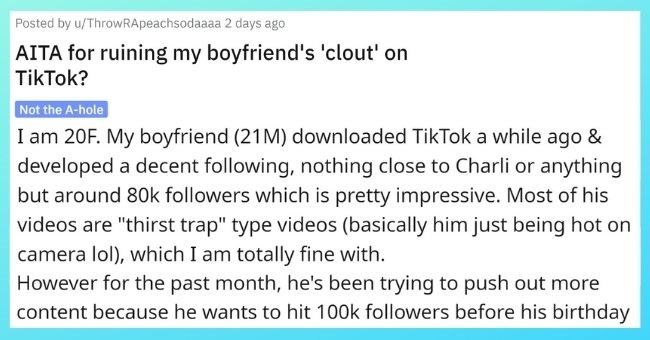