You can find a whole lotta love within families, but you could also find a whole lotta drama in 'em too. Some families are super wholesome, some are batsh*t crazy, and some fall somewhere in the middle. On Reddit's infamous 'Am I The A**hole' thread, we're analyzing quite the complicated family this week. The story begins with two sisters - one a mother, the other one childless - plus she's never having on planning kids and frankly isn't a fan of children at all, including her sister's kids. To make a long story short, the sister's parents only allowed access to the inheritance money to their kids that had children, so when they passed on, the childless sister received none of the inheritance money. She asked her sister to lend her some money for surgery after her battle with cancer, alas she's not exactly in a giving mood considering her sister's nasty attitude towards her children. 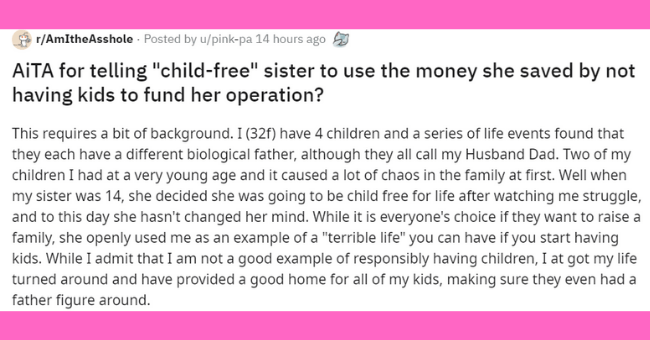 Man's Brother Got His Ex Pregnant, He Refuses To Go To Their Baby's Gender Reveal Party