When it comes to planning a proposal, timing and waiting for the "perfect" moment is everything.

Edi Okoro planned to propose to his girlfriend, Cally Read, for more than a month. In order not to miss the "perfect moment," he brought the engagement ring with him everywhere—and even showed it off in front of his oblivious girlfriend in a hilarious photo series he posted on facebook, showing the diamond just inches away from his girlfriend as she slept, stood in line, and even stared straight at the camera.

As the days-long proposal progressed into weeks, Okoro challenged himself to push the envelope even further. "The idea was to take as many photos, in more daring scenarios, until I found the perfect moment to propose," he elaborates, "or until I got caught, at which point I would propose!"

Fortunately, the "moment" finally came before Read could catch Okoro in the act and he shared a final selfie. This time, however, the engagement ring is finally on Read's finger. 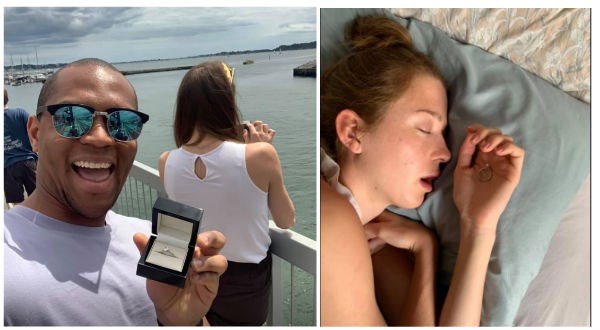 When You Propose in Times Square And it All Goes a Bit Wrong...A man had just successfully proposed in New York and then dropped the ring in the grate!  NYPD police managed to fund the ring and handed it over to the happy couple. Congratulations!

Getting engaged is a huge step in many people's lives. But, what do you do when you receive a ring that you absolutely hate? Does it make you a terrible person if you hate your engagement ring and want to exchange it for a new one? Well, one woman asked the Internet what she should do after she received what may possibly be the ugliest engagement ring we've ever seen. The woman shared her story on Reddit–saying that she was so excited to get engaged to her boyfriend of 5 years. Except, of course, one tiny little detail–she hates her ring. Here is what the funny people on the internet had to say about it.

Woman On Twitter Edits People’s Toxic Exes Out Of Photos

Funniest Relationship Tweets We Scrolled Past This Week

Funny "Baby Yoda Problems" Which Are Like Your Problems, Only Cuter (16 Tweets)

Tweets About The Concept Of Time (25 Panic-Induced Tweets)