People's Stories Of Finding Success Over The Age Of 40

Although people typically map out their career path in their 20's, not everyone is fortunate enough to figure out their life's calling at such a young age. Whether it be down to lack of opportunity, becoming a parent and not working, or just not figuring it out sooner, many people only decide what they want to do much later in life. Those who return to school and start a new career at an older age need a tremendous amount of tenacity and determination and should be admired. One guy, Doug Murano, wanted to celebrate these people and tweeted that he was "tired of "under 40" lists," he called for Twitter users to "Show me someone who got their Ph.D. at 60 after losing everything. Give me the 70-year-old debut novelist who writes from a lifetime of love and grief. Give me calloused hands and tender hearts." People were eager to share their 'over-40' success stories, which were the definition of heartwarming. Here are some of the best. 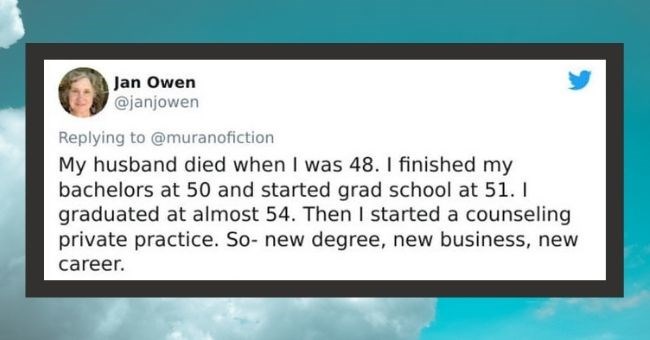